An Epic Handshake: How Epistocrats and Deliberative Democrats Agree 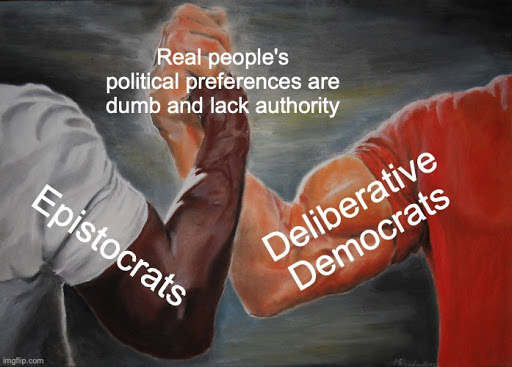 Some thoughts about how to think about epistocrats and deliberative democrats:

Question 1: Do the actual political wills or preferences of the people (of the various individual people) as we find them right now have authority or a high degree of normative significance?

Both deliberative democrats and epistocrats generally answer no to this question, because they hold that the process by which the preferences, beliefs, wills, and so on are formed are in some ways deficient, unreliable, or bad. Both agree we should base politics on people's properly enlightened preferences.  So to see where they depart, we ask a second question:

Question 2: Can we "fix" this problem with democracy?

Deliberative democrats give an optimistic answer: Yes, properly constructed democracy can generate the right kind of enlightened preferences, beliefs, wills, etc. We can fix the people to get them to vote the right way!

Epistocrats give a pessimistic answer: No, the problems are baked into democracy and so generating the right kind of enlightened preferences, beliefs, and wills requires some sort of knowledge-weighting system. We can't fix the people so we have to fix the voting mechanism.